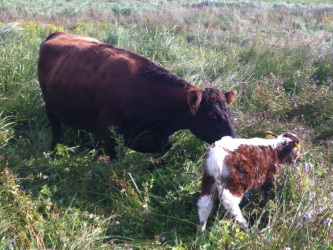 TwoMills Summer Jamboree
The TwoMills herds of Galloway Cattle are based in Pakenham, just outside Bury St Edmunds in a beautiful corner of West Suffolk.The prefix is derived from Pakenham village, the last in England to still boast a working windmill and a working watermill.

TwoMills have Belted Galloway, White Galloway and Riggit Galloway cattle grazed extensively and the majority live out year round, some come in for first calving observation or to comply with Higher Level Stewardship grazing agreements.

TwoMills Herd were delighted to host the Riggit Galloway Cattle Society summer meeting and farm walks for 2014 in Suffolk. The first GCS registered red Galloway (solid) heifer calf on the ground to Rufus of Hindhope and shortly after the end of the formalities the third marked heifer calf was born and named TwoMills Summer Jamboree to commemorate the event


TwoMills genetics can be found in herds throughout the Country including Scotland and Wales and also in Germany.