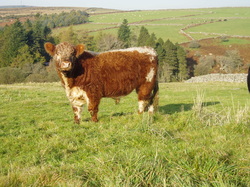 The Riggit Galloway is a well-documented archaic strain of Galloway, easily identified by the white stripe, running down its back. As with other Galloways, the main body colour can be black, red or dun. White markings may also cover the keel and may include other white flashes amongst the solid colour. Riggits should have good beefy Galloway conformation including a medium frame, the typical “teddy bear” face and a thick shaggy coat. They are naturally polled and can thrive on rough moorland.

Having almost died out, a handful of enthusiasts are bringing the breed back from the brink of extinction. There are no records of any being kept for breeding from the beginning of the 20th century until the 1980s. However, George Gerrard’s painting of a Red Riggit female, identified as ‘A fat Galloway heifer’, dated 1804, confirms the breed’s historic origins. In the 80s, The Honourable Flora Stuart persuaded White Galloway breeders to retain Riggit throwbacks and there are now several established herds in Cornwall, Devon, Yorkshire, Northumberland and, of course, Suffolk as well as in their native Scotland. 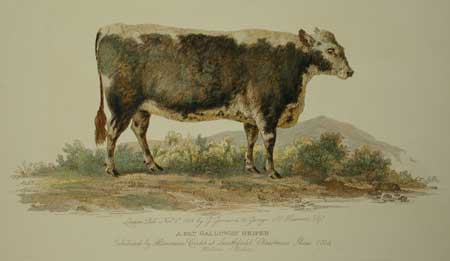